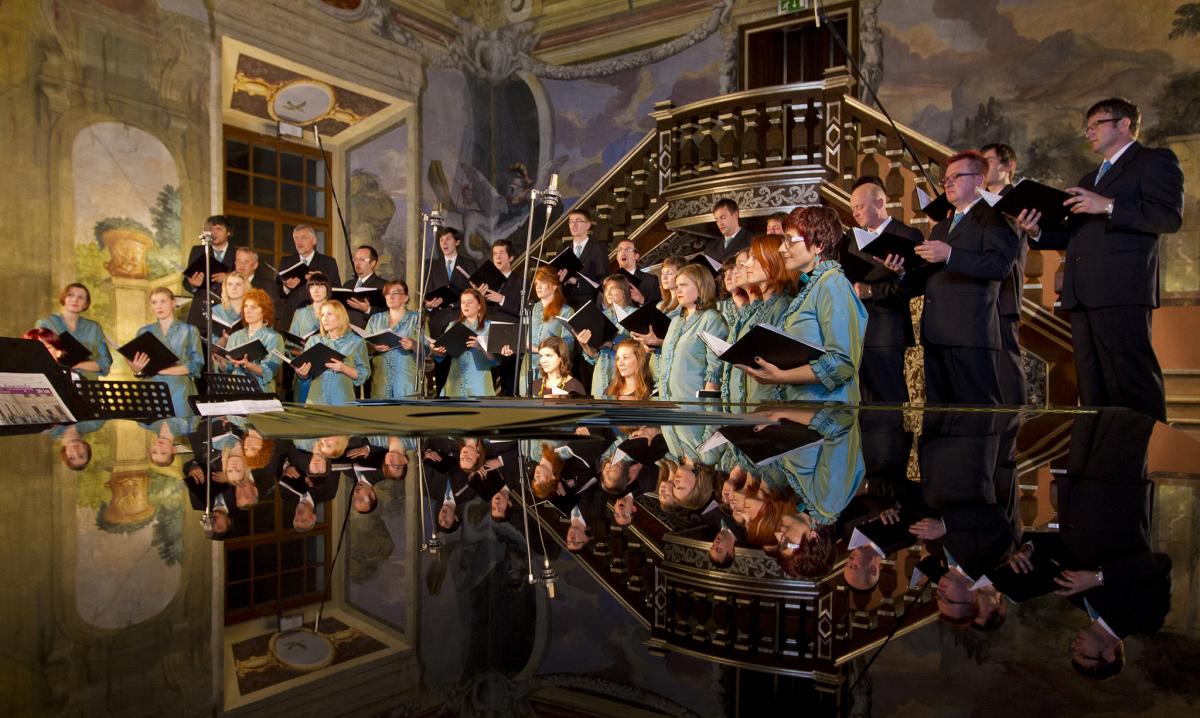 The Mixed Choir Viva Brežice was established by Simona Rožman Strnad in the fall of 1992. Into this new choral circle she invited her musical friends from the local area and since the very beginning of their artistic creations they brought a breath of fresh air into an already rich choral tradition of the Posavje region.

The continuous improvement of the choir’s quality in the past 25 years has been proved at numerous competitions. Their first performance at an international competition in 1996 in Riva del Garda, Italy, was followed by competitions in Lithuania (Klaipeda, 2005), Greece (Preveza, 2007), Italy (Rimini 2009), Thailand (Pattaya, 2013) and Spain (Cantonigròs, Vic, 2016). Highlight achievements are the gold medal and the best choir award from the competition in Klaipeda, the gold medal from Preveza, 3 gold diplomas with more than 96 points, 1st place in the category of mixed choirs and the 2nd place in the jazz-gospel-spiritual category from Pattaya, and the 4th place in the category of mixed choirs with the special price of the competition from Vic.

Beside the competitions abroad, the choir has participated at the Slovenian national competition Naša pesem in Maribor eight times and has received a silver medal seven times.

Because of their quality the Mixed Choir Viva Brežice has been invited to attend several national and international projects. The more prominent are the collaboration at the VII. European days of musical youth in Switzerland (Bern, Luzern), a concert with an Italian baroque orchestra Barrocco di Bologna and several performances of Carl Orf’s Carmina Burana also in Potsdam, Germany. The most distinctive of all the projects is definitely the participation at the musical spectacle of Gustav Mahler’s Symphony No. 8 in E-flat major – The Symphony of the Thousands, which was conducted by the distinguished Valerij Gergijev.

The Mixed Choir Viva Brežice has marked the last six years with several innovative projects of their own. These projects have brought a new approach to the making of the choral music in Slovenia. The most notable being a concert where they performed The Symphony of Everything Flows -  a choral instrumental work in 4 acts composed by four renowned Slovenian composers (Makor, Predanič, Bec, Močnik), based on the texts of famous Slovenian poets. The composition was written especially for the choir and it marked 25 years of its existence.

The choir has released five CDs and has dedicated much attention to the engagement and the performance of fresh musical pieces and arrangements for the choir by eminent Slovenian composers (Mojca Prus, Damijan Močnik, Ambrož Čopi, Vladimir Hrovat, … ), as well as young composers and students of composition (Matjaž Predanič, Tine Bec, Uršula Jašovec, …).

The Mixed Choir Viva Brežice is not just a choir. It is also a synonym for socializing, celebrating, creativity, innovativeness, and especially a love of singing, which has been keeping this choir alive for more than 25 years.

Take a look, here are some of our more significant achievements throughout the years of our existence.

Simona Rožman Strnad graduated from the Faculty of Education at the University of Maribor with a degree in choral conducting. During her studies, and in the years that followed, she gained her singing knowledge in the Carmina Slovenica choir, where she also held a position of a rehearsal coach. In the fall of 1992 she established the Mixed Choir Viva in Brežice and afterwards taught the theory of music at the Music School Brežice and the arts of music at the Brežice High School until 1998. Since then she has been employed as a head of the Republic of Slovenia Public Fund for Cultural Activities, local unit Brežice. In 2013 she also co-established the Brežice High School Mixed Youth Choir, which has been under her leadership to this day.

Simona attended numerous seminars and workshops for choral conductors which were led by acknowledged experts, such as Karmina Šilec, Andraž Hauptman, Gabor Hollerung, Gert Frischmuth, Garry Graden, etc. She received a reward/scholarship for the best young conductor of the 6. International Choir Competition “In canto sul Garda” 2001 in Riva del Garda, Italy. In August 2007,  during the singing week Europa Cantat in Ljubljana, Slovenia, she worked as a workshop assistant, which was held by the acknowledged Gary Graden. She continues to educate herself in choral music at different workshops at home, as well as abroad. With the Mixed Choir Viva Brežice she holds concerts in Slovenia and abroad and also attends national and international competitions. Her achievements from different competitions include awards for the composition and choice of program, the musicality and the interpretation.

Simona Rožman Strnad received the plaque of the city of Brežice for achievements with the Mixed Choir Viva and for growth of youth participation in choral music (2005), the silver and the gold medal of the Union of Cultural Societies Brežice (2007, 2018 for the year of 2017) and the highest Award of the city of Brežice – the October Award (2012) for a remarkable contribution in the development of choral music in the Brežice Municipality and beyond.

We use cookies on our website. Some of them are essential for the operation of the site, while others help us to improve this site and the user experience (tracking cookies). You can decide for yourself whether you want to allow cookies or not. Please note that if you reject them, you may not be able to use all the functionalities of the site.